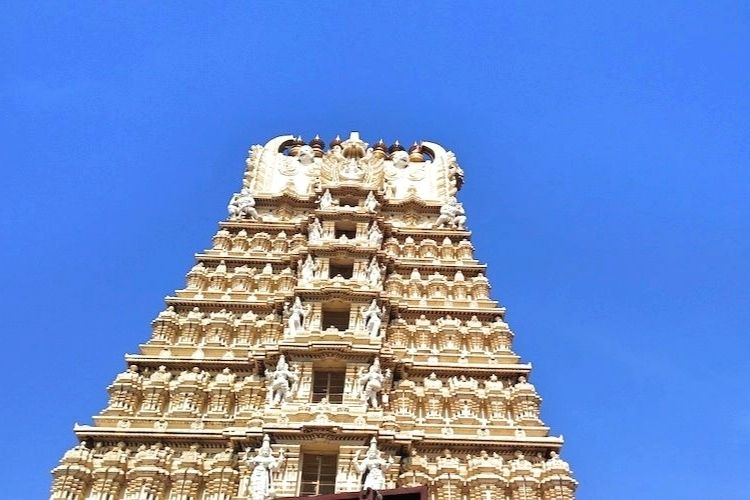 On the seventh day of Navratri, the form of Goddess we worship is Chamundi Devi. One among many temples of Maa Chamundi is in Mysore city of Karnataka state – Chamundeshwari Temple. And today I am going to share my experience as well as sprinkle some tips to travel better.

I remember my childhood days…when Chamundeshwari Devi was worshiped during Navratri, I always used to ask my mother about her, and mother used to narrate me the stories related to the Chamundi Devi. I knew the Goddess since then and came to know about the hill named after her, Chamundi Hill, during my visit to South India.

I conceived the idea of ​​visiting this holy and revered place. On the very next day, departed for the temple route with a feeling of faith in the mind and the form of mother in the heart. As the bus was climbing up the hill, some very enchanting and fascinating scenes became visible.

Originally it used to be a small temple. Later the Mysore Maharajas have continuously contributed to its expansion and this is the form of the present temple (pic below). It is also said that once animals were being sacrificed here, which stopped in the 18th century. This temple was maintained and patronized by the ruler of Mysore.

This temple is one of the 18 Maha Shakti Peethas. It is about a thousand years old. It was first built by the king of the Hoysala dynasty in the 12th century. In the 17th century, the king of the Vijayanagara Empire built its upper part. In fact, Chamundeswari Maa is considered as the Kuldevi of the Wodeyar Empire.

History of the Temple

A 1000 steps for the temple were built by Dodda Devraj Wodeyar in 1659. During his reign, a huge statue of Lord Shiva’s ride Nandi was also constructed, which is 16 feet in height and 25 feet in length. It is considered to be one of the largest statues of Nandi in India. You will find captivating hanging bells around Nandi’s neck.

In 1827, Krishnaraja Wodeyar III renovated the temple. It was during his reign that the entrance to the temple was built. Krishnaraja Wodeyar also presented a lion-shaped vehicle for the temple, called the ‘Simha-vehicle’, as well as many other vehicles that are now presently used for religious and temple processions. . There is also a 6 feet tall statue of Maharaja Krishnaraja Wodeyar III in front of the sanctum sanctorum, which is worth noting. Statues of his three wives, Ramvilas, Lakshmivilas and Krishnavilas, are also located on either side of him.

Perhaps not many people know that the name of Mysore city was actually named after the monster Mahishasura. He once ruled here.

As I moved forward, I saw the statue of Mahishasura. I stayed there for a while. The colorful statue holding the serpent in one hand and the sword on the other hand remained the center of attraction. Everyone was engaged to take photos. I too took some pictures and departed further. You will also get to see some eunuchs here.

The Charm of the Main Temple

After walking a few steps, a tall figure appeared. Yes, finally I reached the entrance of the main temple. After taking off my slippers, I proceeded to enter. To reach the main gate one had to pass through a path surrounded by iron/steel enclosures. Inside was the statue of Maa Chamundeshwari which was carved with black stone.

The idol of the mother embellished with the eight arms was giving a very beautiful impression. Some priests were offering prayers around. Later proceeded after darshan. Due to the large crowd of devotees, I could not get enough time to spend inside the main temple.

Chamundi Hill and The Temple Style

Since childhood, I have only seen South Indian styled temples in books but never in real. This was the first time when I ever saw a temple like this.

Built-in Dravidian style, Chamundeshwari temple touched my heart and mind. Undoubtedly craftsmen were skilled at those times. From the front of the temple, some small idols of mother and some lions can be seen carved along.

Chamundi hill is situated at an elevation of about 3,489 feet above sea level. These hills are located at a distance of about 13 km from the city of Mysore. These hills are about 800 feet above the city of Mysore and are mentioned in ancient Hindu scriptures like ‘Skanda Purana’ and ‘Markandeya Purana’. This place is mentioned in these texts under the name Trimutakshetra.

The place is surrounded by eight hills and Chamundi hill is one of them. Previously, the hill was known as ‘Mahabaldari’ after the Mahabaleshwar Temple, which is dedicated to Lord Shiva. It is also the oldest temple on this hill. Later, this hill came to be known as ‘Chamundi hill’ named after Goddess Chamundi.

Ashadh Friday and Navratri are celebrated here with great pomp. Every Friday of Ashadh month is considered holy and special puja is performed. On the 7th day of Navratri, the jewels donated by the Maharaja of Mysore are brought from the treasury of the district and the mother is decorated. In both these festivals, lakhs of devotees come to see the deity.

It is believed that the monster once lived on this hill is known as Mahishasura. Once a fierce battle was fought for 9 days between Goddess Chamundi and Mahishasura, in which the mother defeated the monster. Therefore, the mother is also known by the name of “Mahishasura Mardini”.

The second story is prevalent that when Lord Shiva was carrying Sati Ji, her hair fell at this place.

The story of Maa Chamunda is also described in the Markandeya Purana. According to the Puranas, there were two Asura brothers named Shumbha and Nishumbha who achieved such powers by performing hard austerities that the humans living on the earth, as well as the Gods, began to harass.

Upon praying to the gods, Parvati Ji took the form of a beautiful girl and descended on the earth. Fascinated by his beauty, Shumbha & Nishumbha sent messengers to call her to their kingdom. Parvati Ji refused and they tried to take her by force, on which she took the form of Goddess Kali and killed both the asuras. Since then, she is also known as Chamundeshwari Devi.

Walking a few steps from the temple, I visited a place, where the entire city was visible. One can easily see the Mysore palace. There are some shops nearby where you can do some small shopping. Just remember that you should not forget to bargain.

I spent some time in the market for a while but did not buy anything. There is also a statue of Nandi one or two kilometers before the temple, which I could not see.

There are frequent buses from the Mysore bus stand at an interval of every 20 minutes to reach here. The distance of the temple from the bus stand is 13 km, which takes 30 minutes to complete. The taxi option is also available. One can reach the temple directly by booking a taxi or cab.

This journey was more rewarding and fruitful than I thought. If you ever travel to Mysore then you must include this place on your list. If you have any questions in mind, feel free to express your thoughts in the comment box below.

An Appeal: Please do not throw litter around the places you visit. Use a dustbin and if you can’t find a dustbin, take the trash with you and throw it when you find one. Your small initiative can make India clean and green.

Saadat Ali Khan: The Beautiful Tomb of a Nawaab