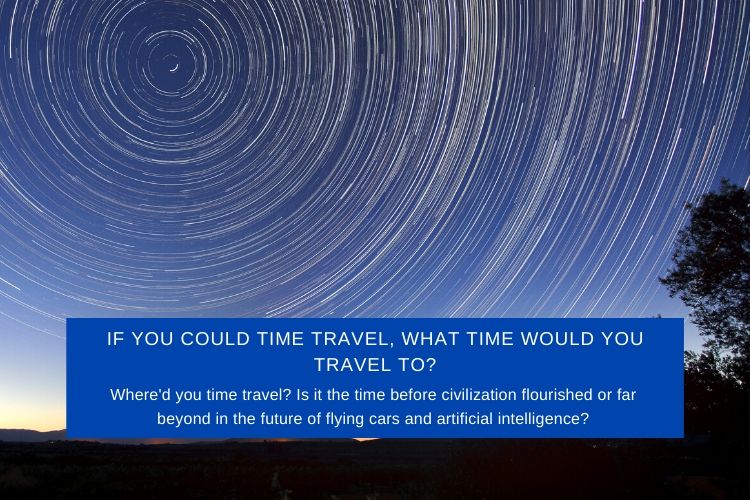 If You Could Time Travel
हिंदी में पढ़े

If time travel becomes a possibility, then what time would you like to travel to? To the time before civilization flourished or far beyond in the future of flying cars and artificial intelligence?

The 2020 ‘coronatimes’ have made me realize the importance of time. And even led me to read about time. We say things like that ‘I don’t have time to do this and that’, but in reality, we can never have time. It is the time that has us. The moment we are born, we start to decay – just because of the time. Irony or paradox.

Today’s post is a bit different. Today I won’t talk about the top places to visit in bla bla bla. You won’t get anything practical today, but if you stay to read till last, I promise you’ll not regret it. Umm…provided you pay all your attention.

The workload is less, normal traveling is gone, well at least for 12 months, and I am all bored without travel. And this led me to ponder over time travel. A type of travel we fantasize or maybe deep down – want it?

When we get a near-death experience, we begin to value our lives more! Isn’t it ironic that at times like these we think so much about life? Then all we want is to best utilize time. Maybe death can be the biggest blessing – something like what Socrates thought.

Why do we travel in the first place? If you ask this question, anybody in their right mind would give a lot of Earthly reasons – to enjoy, to do business, to explore, for architecture, etc. But one thing is common for all reasons – admiring that very same time in a different place and different conditions.

We, travelers, are nothing but fascinators. We admire the beauty and forget about the time back in our permanent settlements. But I don’t know which is the cause, and which one’s the effect.

Scientists like Stephen Hawking and Albert Einstein, have given many theories and tried to solve many mysteries of the universe. Even said there’s a possibility to travel through time. Movies like Interstellar, Gravity, Matrix, Netflix’s Dark, etc, tried to visualize these theories and made top-rated content to watch.

I am not an expert to claim, and this is all coming from my imagination. If you had met me 4-6 years ago and asked if time travel is possible, I would have straightway said no. But now I cling to the opposite – and I think it is possible.

As a traveler, I would love to time travel and blog about it.

What is the time? The tick-tock on your house’s wall? The wrinkles becoming noticeable on your face? The clock? Truth is we don’t know what time is. But for us humans, it is the most important resource we can ever have – much greater than money. And yet we can never make it stop, only we could utilize or waste.

Think it for a second, you could never ever have this exact moment again, this very exact hour, minute, and second. Funny that we most often don’t realize this, and time slips away.

But what if you could? Hypothetically speaking, wouldn’t it be fun to know really what time is? Is it really the 4rth dimension as Einstein said.

As of now, we know time as linear. It works on the principle of causality – every effect has a cause and vice-versa. So by this principle, time is nothing but a reflection of change we experience?

Albert Einstein said time is nothing but an illusion. It’s relative and changes according to how we experience it. His theory of relativity supports all his claims.

Nasa explains this with the help of an example.

“There was an experiment that used two clocks set to the exact same time. One clock stayed on Earth, while the other flew in an airplane (going in the same direction Earth rotates).“

Theoretically speaking, we can travel through time. But maybe not the way we have seen in books and movies.

So what now? Why don’t we build a time travel or teleportation machine? It’s not that simple.

Stephen Hawking in his final book Brief Answers to the Big Questions suggested that time travel may one day be possible. But our current understanding of physics can not say that quantum mechanics, however, can.

I wish it was true and that we had a portal or time machine to skip the hard times. Unfortunately, we are not that much developed yet. Maybe the reason why time travel is still in theories is that we don’t have the capabilities to perform the right kind of experiment.

Do you know the fact that time slows down near a black hole?

So, What Time Would You Go?

Stars and sky have always attracted me. I often look at them and think about them. Sometimes I want to get near them, sometimes I just ponder over the way they look. They somehow make me realize how tiny we are and tell me in a peculiar, strange way – there’s more to know.

So, one day when our theories get converted into practicals, and time travel becomes a thing I would love to go into the times when space travel and exploration become common. But I don’t know which will happen first – time machine or space travel, neither my small mind can decipher this extremely beautiful thought.

But what about you, what time would you go?

Kot Bhramari Temple is Where You Get 360° Views of Himalayas

The Dalai Lama Temple & The Boy Who Sought Peace