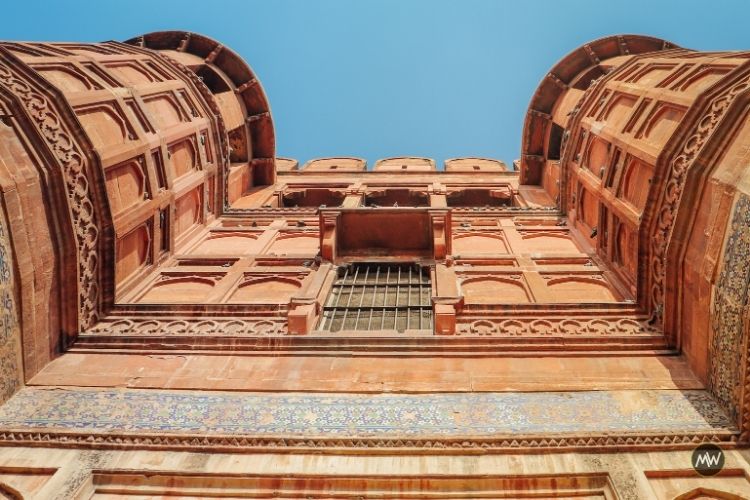 Agra Fort is a red sandstone fort and originally an expansion of a brick fort built by King Badal Singh. The grandeur and the credit for its construction are given to Mughal emperor Shah Jahan.

This notion arises in our hearts when we think of Agra. Albeit, the city is also famous for the sweet Pethas which no traveler goes back without tasting.

My recent visit to Agra has been a special one. I didn’t visit Taj but everything beyond Taj. So in this post, I’ll introduce you to some hidden gems of Agra which are generally ignored or visited less frequently.

After exploring Fatehpur Sikri, in the same sequence, I reserved the next day to visit Agra Fort.

As we walked near the entry gate, Vipin started booking the ticket online. Suddenly, one of the sahibs called himself a formal guide and said to me, “I’ll show you the fort for just 200 rupees.”

“No, I will do that myself, thanks for asking,” I answered.

“There are 16 palaces inside the fort, you won’t be able to identify! Well, let’s agree on 100 rupees for 2 people,” he insisted.

“Brother, this is my third visit to Agra Fort, I know things,” Vipin said confidently.

We reached the security cordon and then a guard said, “You cannot carry this tripod,” showing us our tripod. On requesting a little, he agreed that we can take it if we promise we will not use it at all.

Although the palace mainly has four entrances, three gates are closed to tourists (acquired by the army), and the door through which you enter is the Amar Singh Gate, which is on the south side. Another gateway, located on the north side, is known as Delhi Gate.

After entering through the Amar Singh Gate, another entrance stands ready to welcome you. Fine workmanship and colorful tiles add to its beauty.

Here the gatekeepers were stationed on elephants, so it is also called the Elephant Pole. As you keep going, high walls on both sides start to emerge, at the end of which stands another gate.

Historians believe that in the 11th century, a Rajput king named Badal Singh built this fort out of bricks named it after his name as ‘Badalgarh,’ which remained so until Akbar’s arrival.

In 1180 AD, Ghaznavi’s army captured it. After that Alexander Lodi was the first emperor of Delhi who lived in this fort. Since then, Agra has become the second important capital after Delhi.

The fort was inhabited by Ibrahim Lodi, son of Alexander Lodi until he was defeated by Babur in the Battle of Panipat in 1526 AD. Babur also lived here for a few years and his son Humayun also lived in the palace till 1540 AD. He built some noticeable buildings and the Baoli.

Humayun was defeated by Sher Shah Suri in Bilgram and lived in the fort until Humayun regained it. And finally, this fort came under Akbar with victory in the Battle of Tughlakabad in 1555 AD.

Akbar understood the importance of this fort and he shifted his capital from Delhi to Agra and converted this simple-looking fort from red sandstone to a plush fort. The fort which is seen today is the result of 8 years of construction and the hard work of ~4000 workers.

From Akbar to the last Mughal ruler Aurangzeb, all lived in this fort. Shah Jahan built many white marble buildings in his era in the fort.

The historian Abul Fazal claimed that the fort encompasses 500 buildings and described it as a marvelous piece of architecture.

It was invaded and captured by the Marathas in the 18th century and eventually the British took control of it in the Anglo Maratha War in 1803. It also played an important role in the Indian mutiny of 1857.

This fort once had many buildings, but over time the buildings were destroyed.

Today, 70% of the entire fort is under the control of the Indian Army and only 30% is open to the general public.

In 1983, this fort was included in the list of World Heritage by UNESCO.

As you pass through the emerging wall, just before the gate, Jahangiri and Akbari Palace can be seen on the right side.

The Akbari palace is in a demolished state and only a few walls still stand. We started exploring this palace first before going to Jahangiri palace.

Having clicked a few good pics, we started moving towards the Jahangiri Palace. At the front gate, you will see a big pot. The inscriptions tell us that this was the bathing pot of Jahangir.

The palace is made from red sandstone with beautiful sculptures. It was the harem of Akbar where more than 500 women lived. It is one of the largest buildings with considerable expansion.

Since Jahangir’s childhood was spent here, it is named Jahangiri Mahal. Akbar and Jahangiri palace are jointly called Bengali Mahal, because like Bengali architecture it had small courtyards and flat terraces.

As soon as you enter the palace, you come into a square-shaped courtyard. The palace is of Rajputana and Persian architecture, along with hanging-carvings, stone beams, and plaques. Along with the carvings, the lime embellishments add sparks to its beauty.

Can you imagine the making of this fine architecture without the aid of modern machinery and tools?

The next stop is the Shahjahani Palace, which was the first building built by Shah Jahan by demolishing the old building in this fort. It has rooms with a spacious hall. Shah Jahan made white lime plaster over it and made some flower leaves and other figures, due to which it started glowing.

In the verandah of Shahjani palace, you’ll see a 16.5 feet high and 13.5 feet wide gate put in a small room. It is the Ghazni Darwaza believed to be overthrown by the Britishers from the mausoleum of Mahmud Ghaznavi.

Once an English official had said that this is the same door of sandalwood which Ghazni looted from Somnath in 1025 AD and hence also known as Somnath Gate. Later, it was found that it is a normal door of cedar with Arabic inscriptions on it.

After passing through Shahjani Palace and Ghazni Gate, you will arrive at a square-shaped, white marble palace with two palanquin-like buildings alongside.

This fine marble edifice used to be the residence of Shah Jahan and Mumtaz Mahal. Its windows are forged in such a way that you can see the Taj Mahal from here.

On both sides, you see palanquin-like buildings. These were inhabited by the daughters of Shah Jahan, Jahanara, and Roshanara. The architecture appears to be of Rajput style.

Right in front of the Khas Mahal, there’s a small royal pond and Angoori bagh.

Musamman Burj and the Chain of Justice

Aurangzeb captured his own father, Shah Jahan, and held him captive in Agra Fort for 8 years. The place where he was held is Musamman Burj.

You will see Musamman Burj on the left side of Khaas Mahal as you pass through the palanquin-like building.

Shah Jahan used to stare at the Taj Mahal from here.

Akbar built this building with red sandstones where he used to perform Suryopasana. Jahangir also used this place as Jharokha Darshan.

You see a stylized belle and flower leaves studded on its margins and a mix of yellow in white marble.

Next to the Musamman Burj, you see Jahangir’s Chain of Justice.

It was an ~80 feet long chain with bells attached, connecting Agra Fort to a post by the nearby riverbank. It weighed about one quintal and was also called Adal-e-Jehangir.

It was an innovative method forged by Jahangir to hear complaints of the common public. Anyone who had a complaint could ring the bells and the emperor would address his/her issue.

On the west side of the Musamman Burj and near the Khaas Palace, there is another unique specimen that offers an amazing view of the artwork – Sheesh Mahal or the Palace of Glass.

This palace is closed for tourists but you can peep and admire its beauty through a see-through door.

The glass ornamentation has been done on all the walls and roofs. The vials were imported from Syria. Due to the presence of glass all inside the Sheesh Mahal, it used to reflect light illuminating every corner,

Outside, you’ll Angoori Bagh with 2 fountain pools with saffron-colored and green grass.

In front of the Khas Mahal and at the end of Angoori bagh, you cross a small door to arrive at Diwan-e-Aam.

The Diwan-e-Aam is an open, large rectangular building standing on beautiful columns and has a large open space in front. The emperor used this place to listen to the problems of the general public and give solutions to them.

Just in front of it is the tomb of an English officer named John Ruskell who was killed here in the revolution of 1857. During the revolution, the British made it a storehouse of ammunition.

On the left of the emperor’s seat in Diwan-e-Aam, you will see stairs taking you towards the Macchi Bhawan and the Nagina Mosque next to it.

Macchi Bhawan is a square courtyard with green grass. Once it had a small pond with golden fishes in it. Eavesdropping a guide standing near me, I came to know that there used to be a market at this place which was known as Meena Bazaar.

The Nagina Mosque, built-in 1635, was a private mosque. It was used to offer prayers by Shah Jahan and ladies of haram. You can see white domes of this mosque even from the open space of Diwan-e-Aam

Due to COVID-19, physical ticketing is banned and you’ll have to buy tickets online by scanning a QR code near the ticket window. You can also book tickets using the Monuments of Agra app.

Who built the Agra Fort?

The credit for the construction of the Agra fort is given to Mughal Emperor Shah Jahan. Historians believe that in the 11th century, a Rajput king named Badal Singh built this fort out of bricks named it after his name as ‘Badalgarh,’ which remained so until Akbar’s arrival.

How far is Agra Fort from the Taj Mahal?

The distance between Agra Fort and the Taj Mahal is approximately 4.5 km.

How to reach Agra Fort from the Taj Mahal?

You can travel between these Agra Fort and the Taj Mahal using e-rickshaw, tuk-tuk or taxi service like Ola, Uber etc.

When was Agra Fort built?

The construction of Agra Fort was started in 1565 by Akbar and completed by his grandson Shah Jahan in 1573.

I regret that I couldn’t see Diwan-e-Khas and the Jahangir’s throne due to some unavoidable reasons.

My visit to Agra fort has surpassed my expectations. This grandeur fort can’t be missed. You’ll especially like it if you love to admire the architectural beauties and loves history.

Hope this in-depth travel and exploration guide to Agra fort has met your expectations.

Tell us your views in the comment box below – have you been to Agra fort? How did you like it?

This is the staff account of Misfit Wanderers - a travel blog curating uniques stories of India and sharing travel tips.

When a Dream Came True: My First Solo Trip (Part-2)