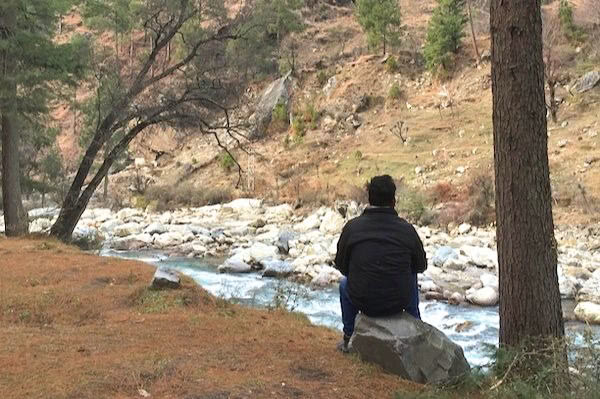 I was completely lost by my surroundings as if I was somewhere flying as if I’ve lost all my problems in life and there’s nothing more important than the present. An immense feeling – freedom, felt at Kasol in Himachal Pradesh, India also known by the name “Mini Israel of India.”

Before you wonder, no I wasn’t stoned. In fact, I didn’t smoke weed or hash even in the stoner’s paradise.

It was the views, picturesque nature, that flow of soft & cool wind, those tall pine trees touching the sky and the gushing of river Parvati. Everything was in one place, Kasol.

Better known as stoner’s capital, Kasol is often not remembered in terms of beauty. I won’t deny it’s hippie culture, Israeli foods and what is claimed to be one of the ancient civilization with their culture still alive.

My stay at Kasol was short. In fact very short…

I stayed there for about 2 days and completely soaked myself into the fresh natural beauty. Just look at some pictures I shot from my sturdy iPhone 6.

I didn’t go anywhere deliberately. Although I wanted to go for Kheerganga trek but was closed because of the heavy snowfalls. So I just spent most of my time sitting on the banks of Parvati river, wandering in the thick pine forests and shooting some videos.

If you hate Paan walas, you can have a look at the routes set accordingly from where you’re coming from…

Also note that there’s an airport too at Bhuntar, we call it as Kullu-Manali airport.

You know what, a tragedy happened when I reached Bhuntar. I was about to try Couchsurfing for the first time, it was expected that we’ll reach by the evening.

But…we (me and Abhishek) reached at 12:30 am (the clouds were dark) at Bhuntar. Everything and everyone had gone into sleeping mode by that time, literally. Even we stepped into a dog’s abode searching for any place to stay. And yes the dog bloody barked on us up to half a km.

At last, we saw a hotel, which was open but was about to close. We ran with our bags and bargained and got the cheapest price. Done and done, pff.

It was freaking cold outside. We threw our rucksacks and fell into the bed to let our tiredness turn into swiftness.

The night passed and we didn’t see anything outside but only hear the gushing of the river in the night from the window. But when the morning arrived, the view was damn different. You can understand by the following pic.

Yeah, I know. It was jaw-dropping, we couldn’t help but start bombarding stories on our Instagram, #MorningsLikeThis.

From Bhuntar to Kasol.

Bhuntar was cool. As we started marching towards the bus stop to reach Kasol, one guy jumped in front of us.

“Loge bhai?”, said the guy as he opened his fist.
“Kya lunga?”, I replied in bewilderment and not seeing in his hands.
“Ek dam kadak maal hai!”, he hissed.
“Oh achcha ye, na bhai hum log nahi pite hai”, I lied and moved ahead ignoring the weed he tried to sell.
“Kasol me mehnga milega, 800 rupaye me le lo”, he said showing his salesmanship.
“Na bhai, hum mehnga hi pite hai”, we shown our sarcasm skills and moved away.

From the bus stand, you can get either HRTC (government) buses or private buses going to Manikaran. Kasol is on the way. And Manikaran is a holy place for Sikhs and Hindus. So what we did, we jumped on a private bus. And it charged us around 150 INR (if I remember correctly). Internet was working, thanks to Jio. We were continuously tracking our location on Google Maps.

It was a minute walk from the road and beside the majestic river Parvati. And man, it was in a damn beautiful location. See the pictures for yourself!

Well, it was going to be our first Couchsurfing experience and there was a voice in my heart which was continuously saying that what if they ask money at the time of leaving the accommodation (but at the end nothing like this happened).

Anyways, all the formalities were cleared and we made our home in a little tent (yep, the yellow tent above).

Getting ready to see the river.

After a few minutes of rest, my itch was getting intense. So we put our heads out of the bed and started to march toward the river. It was completely like a landscape, an old village, ladies in traditional wear, huge mountains and farmlands. We reached the river after crossing through a typical Himachali village.

What you can get?

If you’re someone who is totally in love with nature, you’ll find Kasol extremely beautiful. For others, this might not be as exciting as it is for nature lovers. Moreover, Kasol is base for more than three treks including the Kheerganga trek.

We went to the Kasol market (3 km) on the second day and it was like any other market in Himachal Pradesh. Except, there was Israeli cafes, hippies, local dhabas Hebrew carvings and a flea market.

Good thing, you can get inside any cafe and interact with those people. And as I’ve heard of, people often offer you weed for free if they like you (seems like nobody liked me 😏).

And as I’ve said earlier, there no sightseeing points or tourist attractions in Kasol other than nature’s beauty in abundance. But the place is fit for spending time with yourself alone as well as the people whom you love.

Processing…
Success! You're on the list.
Whoops! There was an error and we couldn't process your subscription. Please reload the page and try again.

Dazzling Places To Visit in Coorg