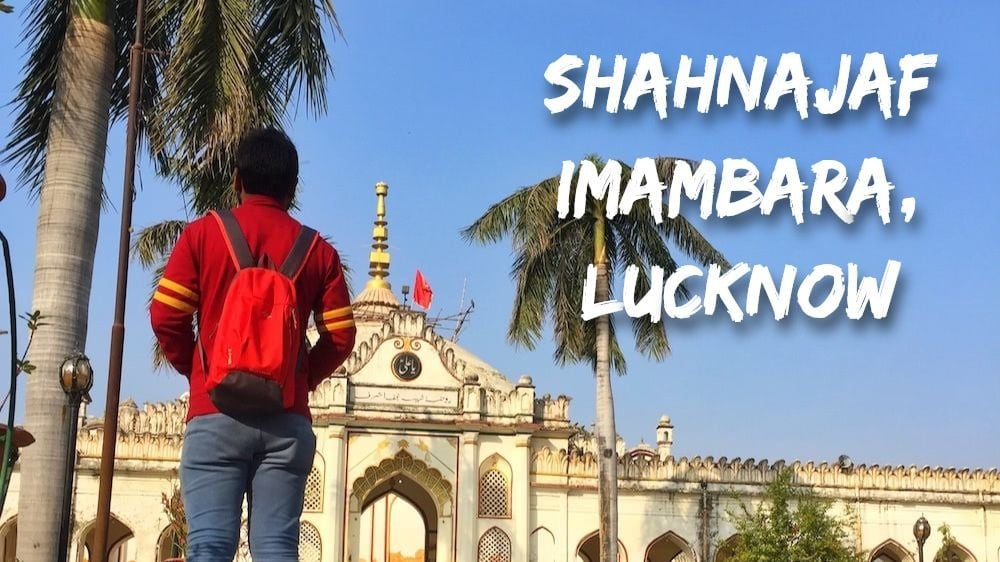 Most Lucknowites only know about two of the prominent Imambaras i.e., Bara Imambara and Chota Imambara. Matter of fact there is many more Imambaras in Lucknow. And one remarkable among them is Shahnajaf Imambara!

Imambaras are the holy places built for the avatars of Allah. Imambara was built by the first king of Awadh, Ghazi--Din Haider, in the memory of Hazrat Ali, the son-in-law of the prophet of Islam, Hazrat Mohammad.

The path from the main door to the Imambara gate is made of white marble. Lakhori bricks and almond lime have been used mainly in its design.

As we entered the building, the shapes and textures of the verandah kept drawing our eyes. We were surprised to see that our city of Lucknow reflects such great wonders of history and architecture.

Entering inside we found some walkways and doors and a long way to the verandah. There was a large hall under the center dome of Imambara, where the remains of Ghazi-ud-din Haider have been kept at his will. The hall was very beautiful and decorated with the artistry of the mirrors.
Apart from Ghazi-ud-din Haider, his three queens, Sarfaraz Mahal, Mubarak Mahal, and Mumtaz Mahal has tombs here.

The Shahnajaf Imambara is a replica of Hazrat Ali’s burial at Najaf in Iraq. The building is settled near river Gomti, on Rana Pratap Marg in Lucknow and is made up of Lakhauri bricks. The most remarkable landmark today would be Saharaganj Mall which is in front of the Shahnajaf Imambara.

Until 6th Nawab of Awadh, Saadat Ali Khan, the nawabs were just caretakers of their region and lands but not rulers, and were supposed to be under control of Mughals!

Imambara – generally means a sacred place or building specifically built as a memorial to Hazrat Ali (son-in-law of Hazrat Muhammad) and his sons, Hasan and Hussein. The Imambaras hold the Majlis and other religious ceremonies of the Muslims of the Shia sect.

The ‘Imam’ is the religious leader of Muslims. It is the duty of the Imam to guide the Muslim public, lead a collective prayer in the mosque, Khutba, read, solve the obscure problems of the principles of religious rules, make arrangements, etc. Of the two main sects of Islam, Hazrat Muhammad of ‘Shia’ was followed by the most venerable Imam, the above-mentioned Hazrat Ali and both of his sons. They were sacrificed while fighting for their birthright from the opposing party.

In his revered memory, Shia people mourn every year in the month of Muharram by worshiping a special horse, symbolizing their horse ‘Duldul’ and remembering those leaders and taking out processions as a symbol for them. These processions (Tajiya) are either buried in Karbala or kept in Imambaras. On this occasion, celebrations are held in the Imambaras to commemorate those martyrs.

Entry to Imambara is free for people of all religions while mosque to the side of Imambara is only accessible to Muslims.

Next to the National Botanical Research Institute and in front of the popular Saharaganj Mall, you can easily reach here via public transport or cabs.

How to reach Shahnajaf Imambara?

The main stations of Lucknow are Lucknow Junction, Badshahnagar, Gomtinagar. All the stations are connected to all parts of the country. You can reach here easily from any corner of the country. From the station, you can take taxis (Ola, Uber, Rapido) as well as auto, local bus. Metro trains are also available on some routes.

Chaudhary Charan Singh International Airport (Amausi Airport) is the only airport in Lucknow, which is connected to all parts of the country. From the airport, you can reach here easily with the help of a metro train (Nearest Metro: Hazratganj Metro Station), bus, auto, taxi, etc.

The distance of Lucknow is 500 km from the country’s capital Delhi. The city is well connected to other cities by a national highway. It can be reached from any corner of the city with the help of auto, cab, bus and metro

Our visit to the Shahnajaf Imambara was very subtle and to the point. We went on regular noon of December 2018 via our most loved scooter.

As we were trooping inside the building, we ran our eyes over the vast stretch absorbing all the details. We were amazed to see that our city Lucknow beholds such great marvels of history and architecture.

Entering inside we found some mesmerizing pathways and a long stretch of doors and verandas. Reaching the center of Imambara, there was a hall under the dome where the remains of Ghazi-ud-Din Haider were put as per his wish.

The hall was beautiful and decorated with lots of glass artistry so as to reflect maximum light. Apart from this, there were graves of the king’s three queens namely Sarfaraz Mahal, Mubarak Mahal, and Mumtaz Mahal.

We met a man, supposedly a guide, who explained to us about the King, portraits of his two wazirs and all the holy things inside the hall in exchange for some bucks.

In the end, all I can say is that it was a wonderful experience to get to know my city Lucknow more closely. Moreover, the exploration made me more curious to learn more about Lucknow and it’s unique angles.

9 Neck Pillows That Will Make Your Travels Easy

Mandarmani Beach: Pristine, Tranquil and Away from the Chaos