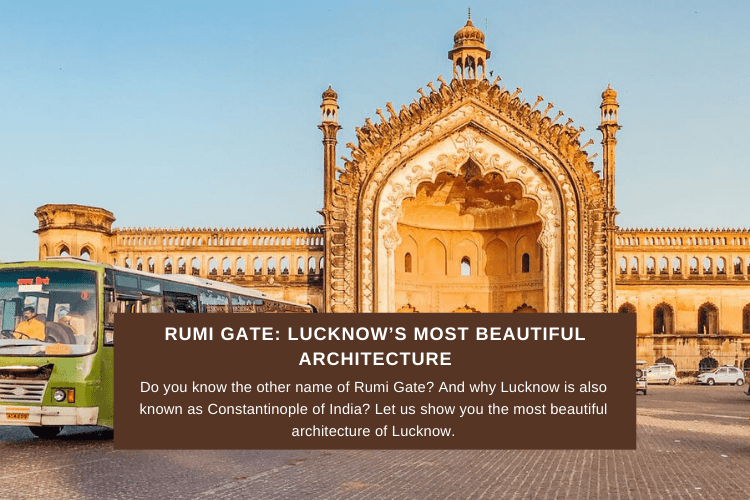 Rumi Gate is one of the most remarkable architectures of Lucknow. Its intricate details will leave your imaginations to go jaw-drop. Often Rumi Gate is showed as a symbol of Lucknow.

The 60 feet tall Rumi Gate (locally Rumi Darwaza – रूमी दरवाज़ा) marks the entrance to the old gates of Lucknow. It sits adjacent to the tallest clock tower of India. Furthermore, it was built in the year 1784, by the fourth Nawab of Awadh – Nawab Asaf-Ud-Daulah.

The entire credit for planning out the architecture goes to Kifayat Ullah, who performed his job well and made the dream of such a beautiful building come true. At that time the cost of its construction came to about 1 crore rupees. There used to be a boundary wall behind this door which had the tomb of the British martyrs who died in the battle of Qila Machhi Bhavan in the mutiny of 1857.

Before we begin to explore more, you can take quick glimpses of Rumi Gate from the video below.

Rumi Gate’s architecture will tempt you at first glance. Made from Lakhauri bricks and Badami Lime, it does not use any iron or solid base. From both sides, you will find a lot of difference in its shape. From the west side, the outline of the Rumi Darwaza is like that of Tripolia, while from the east side it looks like Panchmahal. Above this gate, a lamp was used to put, which provided light in the darkness of night. Because of this, its beauty used to be even more breathtaking.

The decoration of the Rumi Gate is very unique. Its outer arch is decorated with snakes. Lotus flower decorations are found in the queue from among the snakes. These lines make it even more attractive. There is an octagonal umbrella on the upper side, which is the way to go. But now the way to go is closed.

On either side of the door is a three-story ventilated archway, with eight-faceted bastions at the end of which there is no dome.

Made During a Famine

Once during the reign of Nawab Asaf-ud-Daula, a severe famine occurred in Lucknow. People had to struggle a lot with the basic things of daily life. Then Nawab Asaf-ud-Daula started getting the Rumi Darwaza constructed as an extension of Imambara. Explaining that the main reason for making it was to give employment to people.

Due to this, 22000 people got employment in those days and famine was defeated by this side.

People were so pleased with Nawab Saheb that people used to praise Nawab Asaf-ud-Daula all the time. One dialogue that became very famous is as follows:

In plain English, it would be: “Denied by God, blessed by Asaf-ud-Daula.”

Mostly due to the Rumi Gate, Lucknow is often referred to as the Constantinople of India. Present-day Constantinople is Istanbul in Turkey. It is so because the Rumi Gate bears a detailed replication of gateways of Constantinople from back then. Constantinople served as the capital of the Eastern Roman Empire (Rome), henceforth the name Rumi. Some people even associate its name with the famous poet “Rumi”. We can not confirm how true this is.

Noteworthy, the modern travelers have reported no such gateways left in Constantinople.

Moreover, the arches and domes of the architectures of Lucknow also hold an astonishing resemblance with the marvels in the Constantinople. Constantinople is known as Istanbul in the present day, which is situated in Turkey.

Knighton writes in his book ‘Private Life of the Eastern King‘ that the entrance to the court of the Sultan of Turkey was also of this model and that is why to this day European historians call it the ‘Turkish Gate’.

How did it become so famous?

To make this door famous, the most genuine tribute must be paid to Russell, he was a New York Times correspondent and he printed the cantonment of Lucknow in 1858 on the entry cover of the British Army. He said in his report that the way from Rumi Darwaja to Chattar Manzil is the most beautiful and magnificent which looks even better than London, Rome, Paris, and Constantinople.

Knighton mentioned this in his book ‘Private Life of the Eastern King‘ as well.

How to reach Rumi Gate?

Approximately 280 km from Agra and 500 km from New Delhi, Lucknow is well connected to the major cities. You can opt from rail, road or airways too.

Also, there’s a plenty of great options to stay in Lucknow, you can use the search widget on this page to find one or just click here.

Upon reaching here, one should go to the old Lucknow to see the Rumi Gate. Local transport is available all the time during daylight. Cab services such as Uber, Ola, etc., are active in the whole city.

Because it is a gate to the city, there are no fees to see it.

What to know before you go?

Unlike Mughal structures, which were built by red sandstone, the Rumi Gate is built with bricks. It was then coated by lime, giving the architecture as deeper details as possible. Capturing such detailed architecture with sandstone would have been an impossible task, hence the bricks.

Why do you call it Rumi Gate?

The Rumi Gate shows a detailed replica of the Gateway to the then Constantinople. Constantinople was known as the capital of the Eastern Roman Empire (Rome), hence the name “Rumi”.

Is there an entry fee?

No. There is no charge to wander here.

It was built in 1784 by the fourth Nawab of Awadh – Nawab Asaf-ud-Daula.

The entrance to the court of the Sultan of Turkey was also of this model and that is why till today European historians call it ‘Turkish Gate’.

What else at Rumi Gate?

Apart from the astonishing architecture, it can be seen as one of the most photogenic places in the city. Photographers shouldn’t miss a chance to capture the vintage vibes it continuously emits.

Horse cart rides are very active in this part of the city. While the whole city has acquired modernization and advanced mode of transportations, this part, in particular, will take you back in history. A nominal fee is charged for the ride. They basically roam in the old Lucknow, close to the various architectures here.

Being residents of Lucknow, we still can’t get enough of this place. You can just sit for hours gazing at the architecture and enjoy chatting with a friend meanwhile. As soon as, the sun goes down, the area gets filled with people, from couples to family and kids. Hawkers and the street vendors can be seen all over its vicinity.

This gate looks even more lovely in the evening. The yellow lighting perfectly blends with its aura. We generally, mostly go here to hang out whenever we can find enough time. There is a garden named Gulab Vatika on one side of it, with lots of chairs to sit.

We wish it’ll urge you to visit Lucknow even more. Check out the top places to visit in Lucknow. Drop your experiences in the comment box below if you’ve been already to this place.

When a Dream Came True: My First Solo Trip (Part-1)

Jhansi – Places to Visit in The Heroic Land of Laxmi Bai