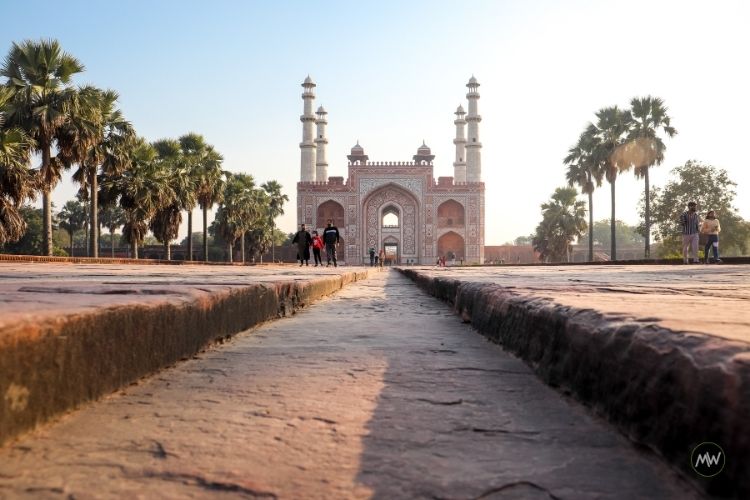 You must have heard the great tales of Mughal Emperor Akbar, his pain of longing, famous chief Birbal and his Navratans (Nine Gems)! His life was glorious, and he influenced many people with his beliefs and ideologies.

Akbar chose his place to be cremated when he was breathing. And this post is about the place he chose – Sikandra in Agra.

Akbar was a ruler about whom we have been taught since childhood. Whether it was Birbal’s intelligence, Tansen’s music, his Hindu wife Jodha Bai, or his ideology “Deen-e-Ilahi” ⏤ Akbar was a brave warrior, settled politician, and a skilled ruler. Therefore, he is also entitled to “Great.”

Having explored Fatehpur Sikri and Agra Fort, Sikandra was the next stop of Team MW, which is located at a good 10 kilometers distance from Agra.

This is the place where the tomb of Akbar is situated as per his wish. It was once known as Bihistabad, which later became Sikandra named after Alexander Lodi came to power. It is so because Alexander was called Sikander in Persian.

Upon reaching the site of Sikandra, the first architecture that you encounter after the ticketing window is the Lodi Tomb of Sikandra. Don’t confuse it with Sikander Lodi’s tomb which is Lodi Gardens, Delhi. It’s an anonymous tomb belonging to the Lodi dynasty as per its architecture.

The mausoleum was at a height, so I climbed up. It looks like a square-shaped architecture, but the corners have been cut to make it octagonal. There is a hall in the middle surrounded by four spacious rooms from all sides.

There are two tombs but it’s hard to identify them. A female worker standing nearby said, “This is Lodi Mahal” when we were busy admiring the beauty.

The architecture is made up of thick plastered over the top. There is also a finish of lime. The dome is destroyed but I can say that it resembles some domes of Delhi. Hence, this must have been of the Lodi dynasty.

Further, as you move forward there’s another small yet attractive palace called the Kanch Mahal. Jahangir used this palace as his hunting ground. Built from 1605-1619, it was also used as a harem i.e. women’s abode. It was built from 1605-1619.

This square-shaped palace is a double-storeyed building, with rooms on the top and bottom floors constructed in a similar series. On the upper part, two forged vents are facing outwards and the same vents are also on the right and left sides.

The ordered combination of flowers, elephants, and other geometric shapes adds to its beauty. The metaphors and motifs on the walls are displayed with red stone fine feature art (fine workmanship).

Blue, green, orange on the terraced roofs and blue and yellow tiles have been used on the glass, which helps it shine, and due to this ornamentation, it is called Kanch(glass) Mahal.

After walking a few steps from Kanch Mahal, I reached a bustling place. Everyone was busy taking selfies in front of the grand and attractive entrance of Akbar’s tomb.

In front of this beautiful doorway is a circular small garden that acts as a perfect spot for cool clicks.

The gate is a double-storeyed building with two small chhatris in front as typically seen in Rajput architectures. Also, there are four minarets on the top four sides, which are built of white marble. But they were not part of the original base, they were added later. For a moment, if its minarets are ignored, then it appears to be just like a Rajput-style entrance.

It is made of red sandstone and the fine workmanship done to the ornamentation makes it even more mesmerizing.

I could also see the symbol of the holy Swastika of Hinduism engraved in it. It shows that during Akbar’s time everyone was given the right to practice their beliefs and worship their God.

Akbar’s Tomb at Sikandra in Agra

Upon entering, you will come to see a wide-open garden with the building that contains Akbar’s tomb, situated in the middle. Entry gates are also there at the other three corners of the garden. But most of them are in a weak state.

The one thing that surprised me the most was that the main building has no domes or towers. There is a fountain just in front of the cemetery which is now non-functional.

At first glance, one can doubt if it’s Mughal architecture at all. From an architectural perspective, it appears to be a mixture of Mughal and Rajput architecture. The combination of chhatris above and the coconut trees in front looks fantastic.

You will see deers and some other friendly animals wandering freely. No tourists are allowed to roam in the garden.

Inside the main building, a lamp hangs upwards, which at that time used to glow. The geometric shapes and artistry on the walls combining with different colors will hook your eyes.

A slope-like path leads down the basement, which I found no less than a cave.

No plush carvings, no magnificent artwork. My mind was shocked that one of the greatest rulers of Indian history and his burial ground is so ordinary.

Then I came to know that in 1688, the Jats of Bharatpur attacked under the leadership of Raja Singh and plundered golden wall layers and precious jewels around the tomb. Later it was renovated by the British Governor-General Lord Curzon.

You will see some other tombs which may have been of Akbar’s daughters or Begums after coming outside. The north gate has been destroyed, and the area around it is deserted. There is no permission to go there.

Akbar’s Death and the Construction of the Mausoleum

As we know that after Akbar, his son Jahangir took over the Mughal Empire. History tells that Jahangir was a nefarious man who annoyed his father a lot. Akbar did not hesitate to cover his mistakes. But in 1591, he tried to poison Akbar but somehow the emperor survived, then later Jahangir rebelled in 1601 intending to become king.

How long did anyone will fight against his son? Akbar eventually declared Jehangir the next emperor. During that time, Akbar grew old and was suffering from dysentery, and died due to lack of proper treatment.

It is said that Akbar chose this place for a mausoleum while he was alive and started its construction. His death made the whole of Agra and Delhi drowned in weeds.

Later, Jahangir hired new craftsmen and got it constructed on 119 acres according to his own. It took 5-7 years to build Akbar’s mausoleum.

Note: Due to COVID-19, physical ticketing is closed and you can use the QR code at ticketing windows to buy tickets online. You can also book tickets using the Monuments of Agra app on iOS or Android.

The thing that will impress you the most is the peaceful atmosphere. You could hear the sound of birds, the tinkling of leaves, and the rustlings of the wind.

Only a handful amount of people visit this place as most tourists unintentionally ignore it due to the glare of the Taj Mahal. But with this post, I want to say, Agra is much more than Taj.

This place is worth visiting, doesn’t matter if you’re a history buff, peace lover, or passionate photographer. Hope this article will help you in the same.

Got anything to say? Please tell us in the comment box below. We are willing to make every effort to improve ourselves further and help you.